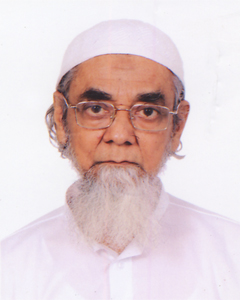 Professor MQK Talukder was born in Sirajganj in 1939 and in 1962 he graduated from Dhaka Medical College, where he worked as House Officer for Professor Ibrahim. After three years as medical officer at Rajshahi Medical College he worked under Professor Nurul Islam at the Institute of Postgraduate Medicine and Research (IPGMR) in Dhaka in 1966. In 1967 he went on a CENTO Scholarship to the UK where he obtained a Diploma in Nutrition from the London School of Hygiene and Tropical Medicine in 1968, a PhD in Biological Sciences from the University of Edinburgh in 1972, a Diploma in Child Health (DCH) from the Royal College of Physicians and Surgeons in  Glasgow in 1974 and MRCP in Paediatrics from the Royal College of Physicians in London in 1977. He has also become a Fellow of the

He returned to Bangladesh from the UK in 1979 to first work as Associate Professor at Dhaka Shishu Hospital and then as Professor of Paediatrics at IPGMR up to 1995. At IPGMR he started and edited the Bangladesh Journal of Child Health between 1980 and 1985. He played a key role along with Professor MR Khan in training all the main paediatricians in this country in the 1980s and 1990s.

From 1995 to 1999 he planned and established the Institute of Child and Mother Health (ICMH) at Matuail, an organisation dedicated to training, research and service provision in Paediatrics and OBGYN. After his retirement from government services, he became the Founding Chairman of the non-profit Centre for Woman and Child Health (CWCH) at Ashulia. He spearheaded the breastfeeding movement in Bangladesh from 1989 with the Campaign for the Promotion and Protection of Breastfeeding (CPPBF) and was Chairman of the Bangladesh Breastfeeding Foundation (BBF) from 1995 to 2008. He continues to serve as Senior Advisor to the BBF.